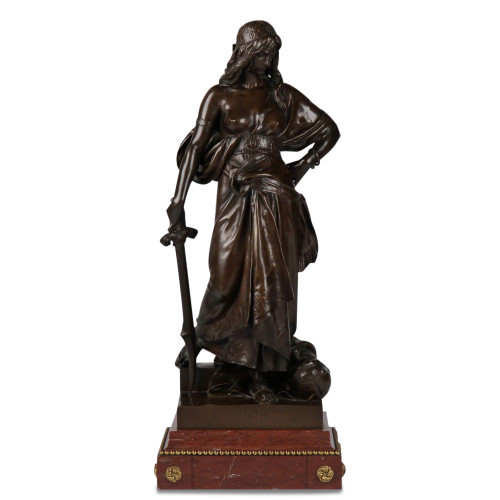 VIEW OTHER WORKS BY Aizelin, Eugene

This is an incredibly fine original antique sculpture by Eugene Aizelin of "Judith". One of the earliest casts of this subject by Eugene Aizelin is held at Musee d'Orsay, a very large bronze statue cast by Thiebaut Freres with a height of 2.1 meters (RF 2222) dated 1889. "Judith" was originally exhibited at Salon 108, Paris, France in 1890. This antique bronze sculpture is of utmost quality, the level of detail captured of striking precision and realism. Standing at a full 28 3/8", it is necessarily a prominent part of whatever setting it joins in your home. Judith stands proud and unapologetic after seducing and decapitating General Holofernes of the Assyrian Army, his head resting beneath her flowing garb; it is a fascinating biblical subject that has been captured by artists in hundreds of different sculptures and paintings starting in the Early Renaissance through the first years of the 20th Century.

Condition Report:
Light chipping to the marble base. Some patina discoloration and rubbed wear, though incredibly minor. Gilt mounts on base with trace oxidization and wear. Overall incredibly fine condition.