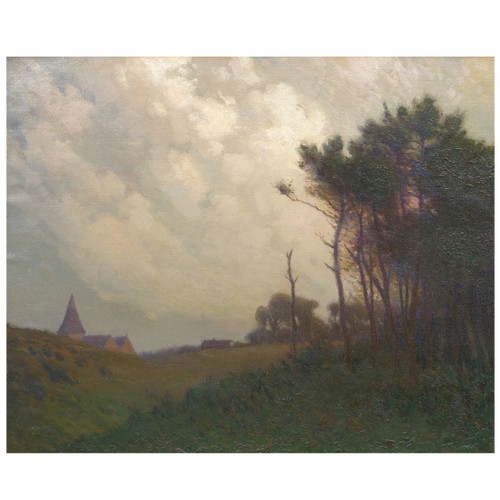 A distinctly tonal image of a countryside framed by trees as the evening light dwindles in the distance, a small town with the spire of a church can be seen just over the hill. The heavy atmosphere of the scene is guided by the luminous cloud cover, beautifully detailed collections of wispy clouds that change in color as the light strikes each. His fields are rich with greens, browns, vivid orange and shades of yellow with an intricate brush work. The trees along the right are highlighted with trace touches of vibrant lapis hues.

The work is unsigned on the canvas while being labeled to the reverse with his original artist label noting "Title: Landscape in Normandy / Artist: William J. Kaula / Address: 311 Fenway Studios - Boston / Owner: The Artist / Where to Return: 311 Fenway Studios / Price: $ 350" as well as an exhibition label somewhat illegible noting "Paris / F". This label is something that remains consistent in most of his work, written both in script and in block lettering.

Born in Boston, Massachusetts in 1871, William Jurian Kaula would first study drawing at the Massachusetts Normal Art School and worked under an apprenticeship at Cowles Art School in Boston while also teaching watercolor painting. He spent time in France and studied at Academy Julian in Paris - it was during this period that William met his wife Lee Lufkin Kaula while painting landscapes in the countryside of Crecy, France.

They married eight years later and settled in Boston where they both lived and worked side by side in their studio at # 311 in the Fenway Studios building. Most of his works include the original handwritten labels noting his address in the Fenway Studios building. Kaula would also study with the famous landscape painter Edmund C. Tarbell at the Boston Museum School and together they painted extensively throughout New Hampshire. Kaula was known as a "Tarbellite" and would eventually become recognized as Tarbell's most accomplished student. New Hampshire landscapes feature prominently in Kaula's work, a product of the regular summers William and Lee would both spend in New Ipswich.

As Kaula's work progressed, there is a subtle transition after the first quarter of the 20th century from a more academic plein aire stylizing to a distinctly expressionistic canvas. He exhibited extensively and was quite successful in his shows, winning for example a medal at the 1915 Pan-Pacific Exposition. He exhibited at the Boston Art Club, the National Academy of Design, the Corcoran Gallery Biennial and abroad at the Paris Salon. In 1953 he held a one-man retrospective at the prestigious Copley Gallery in Boston. He ultimately became the president of the Boston Society of Watercolor Painters despite his extensive work in oils and pastels. He died in Boston at the age of 82.

Work by Kaula is held in the collections of the Smithsonian American Art Museum, the Museum of Fine Arts, Boston, the Georgia Museum of Art, and the Washington County Museum of Art. It has been rediscovered of late with an exhibition of the Springfield Museums and the release of Two Lives

Kaula's work is being rediscovered recently as part of The Springfield Museums Rediscovering American Artists series, where they held an exhibition Two Lives, One Passion: American Impressionist Paintings and Sketches by William Jurian Kaula and Lee Lufkin Kaula along with the launch of the book on the work of the painter and his wife.

Condition Report:
Unlined, though may benefit from a lining eventually with some light ripple to the canvas along the left edge and center. Trace grime and some yellowing to varnish, would benefit from being cleaned. Light surface craquelure throughout. Under UV apparently untouched surface. Early frame with wear to gilt paint.