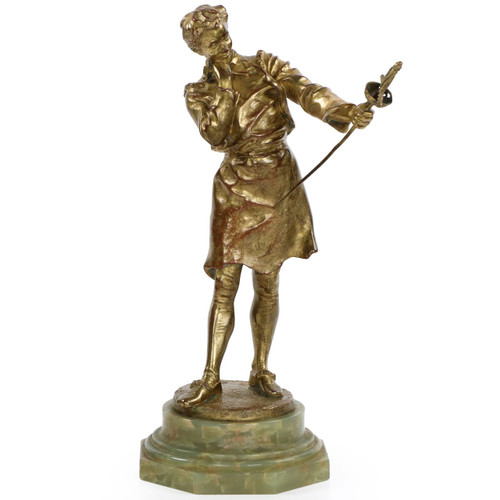 As is typical with works founded by Siot Decauville during the last quarter of the 19th Century, this fine gilt bronze sculpture is exceptionally cast and detailed.  An original work by Henryk Kossowski Jr., the base is signed "I Kossowski" and impressed with the Siot foundry mark along with "S753". While Kossowski was active during the years of 1880-1915, this work was originally cast in 1890 in both 12" and 18" editions, both in brown and gilded patinas.  This particular work is featured in "Bronzes: Sculptors and Founders, Vol. II" on page 379, where it is identified as "L'Armurier" or "The Arm's Maker".  It is shown with the variation to this cast, with the edge of a work bench and clamp beside his leg.

This is a crisp and joyful work of art.  The swordsmith has an expression of utter fascination with his craft, studying the sword with a certain humor and curiosity, still enamored by an object he has probably crafted a thousand times.  His hair is frumpy and disheveled, like one unbathed or overworked, the many wrinkled layers of his leather and cloth smock and clothing tied by a thin belt.  Ultimately, he is a relatable figure, a rejection of the mass production economy of the period and the elimination of the artisan.

Condition Report:
Patina is a warm blend of gilt and a gorgeous red-oxide. Traces of verdigris in the crevices. Sword cup slightly out-of-round. Tiny chips to the marble base.