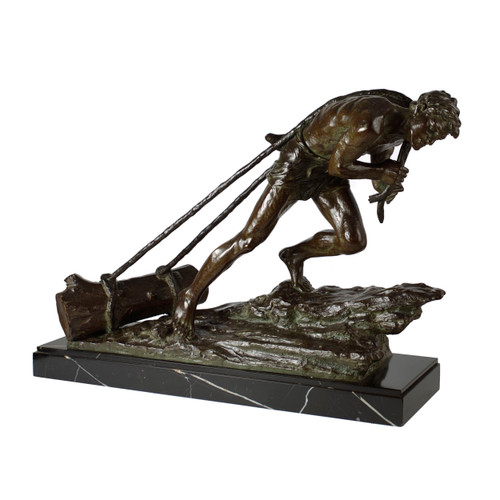 BRONZE SCULPTURE OF "L'EFFORT" AFTER MODEL BY EDOUARD DROUOT (FRENCH, 1859-1945)
Over slate and black marble veneered base; signed "E. Drouot", cold-stamped "BRONZE"; cold-stamped "F.D." upside down on edge of base
Item # 009JQB23M

An incredibly powerful model from Edouard Drouot's collection of labor studies, it captures a lone figure dragging logs through the mire with two ropes stretched taught over his back. Only a slight garment protects him from the elements as he trudges barefoot over the rocky terrain. Finished in a complex brown, reddish-brown and verdigris highlighted patina, the model is situated over a most effective laminated base of high-polish black slate over black marble with cream veins covering a plaster core.

Born in Sommevoire in the Haut Marne region of France on 3rd April 1859, Edouard Drouot spent his early his career as a successful genre painter.  He studied sculpture under the renowned Mathurin Moreau (French, 1822-1912) at the École des Beaux-Arts in Paris and Emile Thomas (French, 1817-1882), a prominent sculptor responsible for numerous state commissions while producing portraits, monuments, allegorical and mythological works in marble and bronze.

In 1882 he made his debut at the Paris Salons (Salon des Artistes Français). He had varied interests and cannot really be tied to a specific style or theme in his work; this malleability an ability to tell a story in a multitude of styles was perhaps his greatest strength. From Art Deco studies of labor to mythological depictions in the Romantic taste, from trying his hand at Animalier subjects to wonderfully fluid Art Nouveau studies of allegory, Drouot produced a large body of very successful work.  His comfort level was clearly in sculpting the human form, though his Animalier subjects are admirable and he incorporated animals in a few of his works, perhaps most convincingly in his dramatic group of Ésclave Combattant un Tigre.  These North African and Middle Eastern subjects are almost without exception passionate and wild works, exotic and full of action.  He further produced a series of North American Indian subjects.

It is however by his mastery of the allegorical figures that he is best known and appreciated.  These are distinguished by a sense of movement and expression that is always dramatic, particularly evident in his Salon exhibit of Printemps in 1897, L’Echo with its swirling drapery or his passionate Allegory of Dusk.  In 1892 he was awarded third-class medal at Salon and achieved honorable mention at the Exposition Universelle in Paris of 1900 for L'Amateur.  He continued to exhibit well into the 20th century, presenting L'Eveil du Printemps in 1906 and Andromache in 1912.  Edouard Drouot died in Paris in 1945.