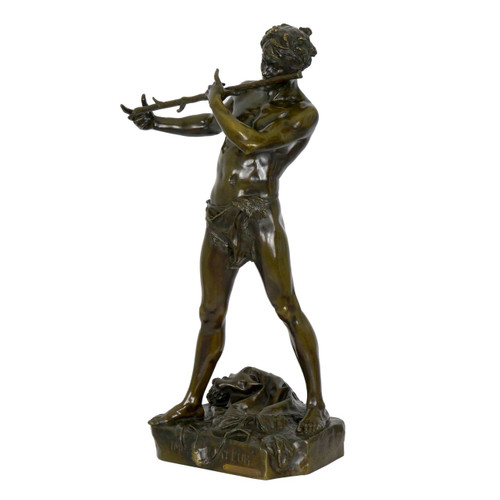 An exceptional antique bronze sculpture capturing the mythological Pan with his flute, the work is an expression of the naturalism that overtook the arts in the late 19th century. Originally exhibited in plaster at Salon in 1887, L'Improvisateur was the work that catapulted Charpentier's career.  Having exhibited at Salon since 1882, it was not until his presenting of L'Improvisateur that his work became recognized and sought after. It won him the second-class medal at the Salon and was subsequently acquired by the Musée Du Luxembourg. He showed it again in 1899, this time in bronze and was awarded a silver medal at the Paris World Fair. The original sculpture captures Pan entirely nude, the full size sculpture on display in Charpentier's home town of Bollène. For the commercial castings, Charpentier added the animal garment so that the work would have more appeal in the homes of collectors.

The sculpture was cast in bronze in three dimensions: 14", 23 1/2" and 31".  This was handled almost exclusively by the foundry of Colin in Paris and the sculptures were featured in the catalogue of Colin until Charpentier's death in 1924. The present example is a very fine representation of the cast, exquisitely chiseled and modeled to capture the fine details throughout.  Note the crisp handling of the loose leafage and foliage throughout his ruffled hair, the sharp features of his face with crisp eyelids and a finely modeled nose, the rough hewn wooden flute gently floating in his hands, the crisp detail of his hands and the tenons of his fingers as they stretch through his wrist, every muscle of his toned body and the twisting and chaotic furl of his loin cloth.  This is a work with extraordinary attention to detail.

Of particular note is the brilliant translucence of the original patina, this being silky and beautifully burnished.  The front of the base is titled "L'Improvisateur" with an old and likely original gilt plaque from which most lettering has worn off.  The right side of the base is signed "Felix Charpentier" and is sealed with the Colin foundry mark below a cold-stamped "MADE IN FRANCE".

An important example in the largest cast dimension, this is a rare and very fine acquisition for its noteworthy casting quality and also carefully preserved overall condition.

Condition Report:
Two old holes drilled in base, likely to affix the sculpture to a column at one point. Rubbed patina highlights to relief in hair and foliage in hair, edge of base, fingers of outstretched hand, edges of animal skin garment.  Gilded plaque on front almost certainly original, black ink lettering since worn off.