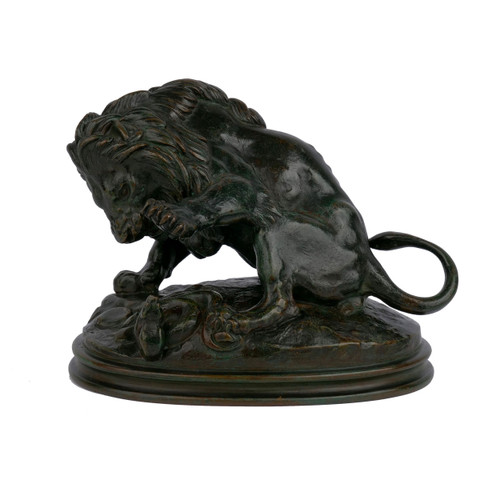 Barye’s Lion Crushing a Serpent helped establish his reputation when he presented the work as a plaster model at Salon in 1833 along with nine other works. This exhibition was particularly interesting in the sheer range of work he presented, from the pure Animalier representation in Lion au Serpent to an Equestrian statue of Charles VI, a stag being hunted by hounds, a fifteenth century figure of a knight and a bust of the Duc d’Orléans. It marked the beginning of his influence on his contemporaries and the patronage of the Duke was an important turning point for his career.

The final work of Lion was cast lost-wax in bronze by Honoré Gonon and was purchased by the French government in 1835. It was originally placed in the Tuileries Gardens (hence, Lion des Tuileries) and the group is now on display in the Salle de Barye at the Louvre. It was one of Barye’s most famous subjects and many reductions of the work were cast, the present example post-humously cast by the foundry of Auguste Delafontaine using the original molds purchased by Delafontaine from Barye’s estate after his death in 1875. The AD stamp surmounted by the star is generally found on models cast by Delafontaine circa 1876 to 1884, after which point the models were simply stamped AD without the étoile.

There are several variations of this sculpture, notably in the slight differences in placement of the Lion and the formation of the base.  This sculpture shows the earlier modeling and studying of what would eventually be placed in the Tuileries Gardens with the serpent trapped under the Lion's outstretched hind leg while his paw is raised to strike the recoiling serpent; this is a somewhat different emotional encounter than the final version, which shows the Lion and the Serpent both poised to strike and neither showing hesitation or fear.  The outcome of the encounter is somewhat left to the imagination in the final version, where the Lion appears to be the clear victor in the present model.

This particular example is exquisitely chiseled and even more finely patinated. Note the complex greens, blacks and browns worked into the model, these signature colors for Barye's work and beautifully preserved.  Careful attention was shown to the sharp claws protruding from his paws, the fine chiseling of the hair throughout his mane and the gentle texturing of his fur.

Condition Report:
Exceptional original condition. Minor handling wear to patina along raised elements including the ridge of the back, very minor wear to edge of the base.