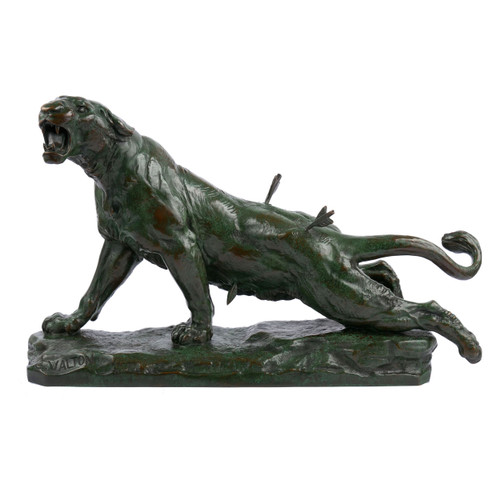 A superb lifetime cast of Charles Valton's "Lionne Blessée" executed by the foundry Siot-Decauville during the first quarter of the 20th century, this extraordinary example is one of struggle and determination. A savage study, the model depicts a lioness that roars and refuses to give up despite having been struck twice by arrow. Her muscles strain and compel her wounded body forward despite the pain.

The regular threat to life and livestock by populations of cats on both sides of the Atlantic made the subject-matter quite relevant during the day and several artists attempted the same subject, though few are brought so nearly to life as Valton's present example.

The work was cast with expert attention to detail and fine finishing work throughout, the surface finished in a compelling green and brown patina with a silky-smooth finish. The result is rather stunning.