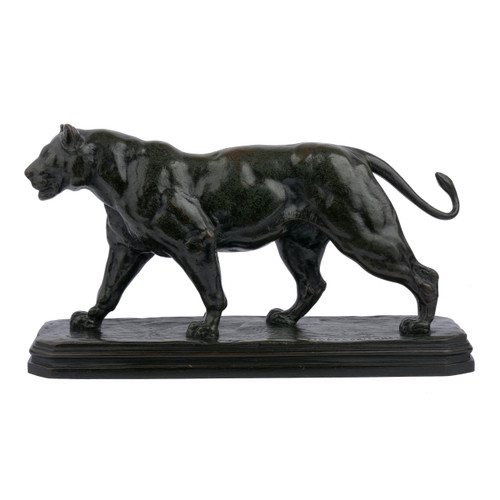 A fine model by Paul Edouard Delabrierre of a striding Lioness, though perhaps being the Royal Bengal Tiger he exhibited at the 1857 Salon or the Bengal Tiger of 1864, it presently tends to be catalogued as "Lionne Marchant".  The work of Delabrierre is extensive and varies quite significantly in quality both of modeling and of the cast.  Invariably, his realist work is more successful than the works he authored in the Romantic taste and remain well sought after by collectors of animal sculpture.  His Romantic works are clearly identified by the anthropomorphic attributes in the animals, the academic standard for animals prior to the emergence of the then controversial Animalier school in the middle of the 19th century.  The present example is a very fine and carefully disciplined work, one that showcases Paul Edouard Delabrierre's potential as a sculptor with his attention to detail in the anatomy and muscle profile of the cat, her vast muscles taught and brilliant beneath the rubbed green and black chemical patina.  The naturalistic base is signed in his typical blocked script E. DELABRIERRE.  It is a fine lifetime cast for collectors of the animal sculptors.

Condition Report:
Some minor handling wear to relief, including the raised rear ankle, tips of the ears, nose, and a light scuff to edge of the hip.  Cleaned, polished and in fine presentation ready condition.