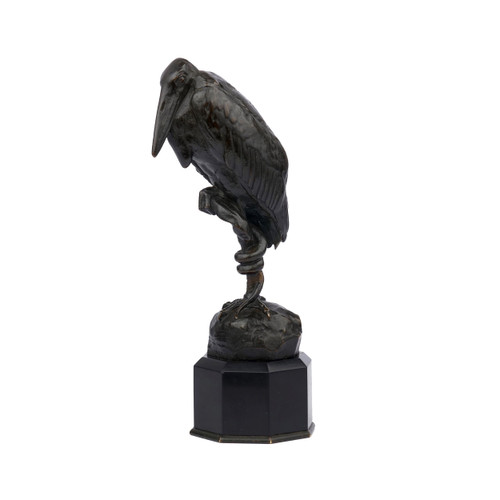 Conceived in 1874, this model of Marabout au Serpent was acquired in bronze and plaster posthumously in 1876 as no. 646 by Goupil to be edited by Barbedienne. The identical model with the octagonal black slate base over a thin conforming brass plate is held in the permanent collection both of the Harvard Art Museums (formerly in the collection of the Fogg Art Museum) and the Baltimore Museum of Art.

The sculpture depicts a swamp bird of Africa standing balanced on one leg where a snake has wrapped itself, its other leg grasping the creature in closed talons. Expertly chiseled, the surface is finished in a nuanced black patina over an amber-brown. Poletti & Richarme estimate the posthumous edition by Barbedienne was rather limited, which seems to be confirmed by the model's rare appearance on the open market.

Signed BARYE to the rock and F. BARBEDIENNE along the bottom edge of the sculpture.

Condition Report:
Horizontal flaw to the original solder joint in the leg. Base shortened slightly (underside sanded down to restore a chip). A very fine presentation.