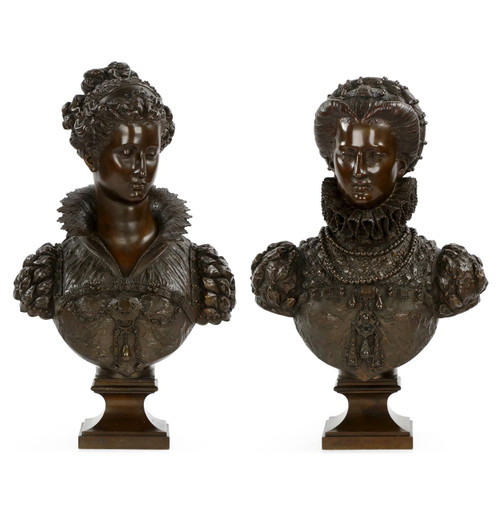 VIEW OTHER WORKS BY Moreau, Mathurin

A powerful pair of Renaissance era figures modeled after the cast by Mathurin Moreau, the busts appear to represent Marie de Médici, Queen of France from 1600-1610, and Mary Queen of Scots, Queen consort of France from 1559-1560.  There has also been some attribution of the second bust to Queen Elizabeth I, as expounded on in the pair of full length sculptures by Mathurin Moreau offered at Christies (Sale No. 1514, March 6th, 2014, lot 19, 40” H, cast by Lemaire, achieved $58,450) and formerly offered at Bonhams under the Queen Elizabeth I attribution.  The casting work is of exquisite quality, both sculptures signed in large print “Ate. Lemaire” along the socle.  Auguste Lemaire opened his workshop in 1851 in the Marais district at 10 rue Saintonge, Paris.  His work was presented at the 1855 Universel Exhibition in Paris where he achieved the second class medal, the same year he was awarded membership in the Réunion des Fabricants.  In the present pair of busts, the chiseling and finishing work is of the finest quality, each hair perfectly outlined and every aspect of highly complex garments and accessories flawlessly executed.  Each is finished in a deep brown acid patina, the original patina in a remarkable state of preservation.  Beneath the left proper shoulder of each figure is the crisp signature of “M. Moreau Sculp” in the cast.

An inordinately fine and most striking pair of sculpture.