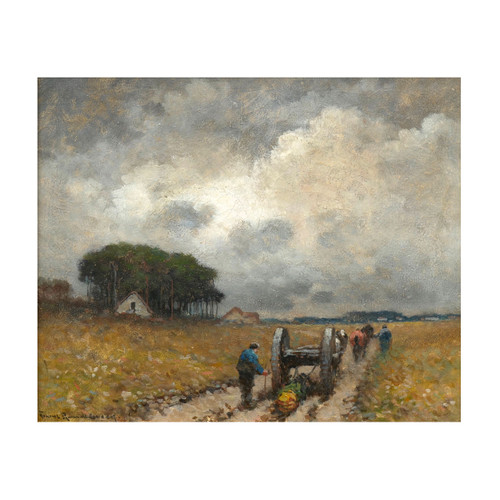 A delightful Barbizon scene that captures the results of a hard day's labor as two men lead their horses, dragging logs down the well worn path through a flowering field. It is striking with an overall low-saturation palette in the gray sky and deep green foliage of the trees that juxtaposes the warm golden light cast across the field. This evokes a sense of an impending storm, where the sun bends through dense atmosphere before being blocked from view by moving cloud cover. It is a vibrant and luminous work with a fine use of light and color to convey a moment in time.

We have one other work by Green currently in the gallery with the same contrast between low-saturation and high-chroma. This atmospheric tonalism and the translucent use of light make Green's paintings so compelling. The present work is signed lower left "Frank Russell Green, A.N.A."

FRANK RUSSELL GREEN (AMERICAN, 1856-1940)
Frank Russell Green was born in Chicago, Illinois on April 16th of 1856 to Russell and Caroline Green.  Despite receiving no encouragement from his father, he showed an early talent for the brush and in 1873 he left Chicago to paint the Rocky Mountains with several young painters and Henry Elkins (American, 1847-1884).  This trip would heavily influence his passion for landscapes, which he primarily began painting in the Hudson River School taste, and also would shape his preference for plein-air painting.  Much of his early work is characterized by its tonal qualities and shares elements of the Hudson River School, the Old Lyme School and the Barbizon School.

In the 1880s he left for Paris for a very brief period before his father’s sudden death prompted his return to the United States.  He spent several years in Boston and New York City where he would work as an illustrator for Harper Brothers, John A. Lowell & Co and a few other publishing houses, during which time he was elected to the National Academy of Design in 1881 as an Associate member and shortly afterwards gained membership in the New York Watercolor Club.  He showed his first work at the Academy in 1882 with the exhibit of a French landscape.

He returned to Paris in 1883 for a period he would later describe as his “years of revelation”, during which time he studied at the Académie Julian under Gustave Boulanger, Jules Joseph Lefebvre, Collin and Courtois while working as an artist and actively exhibiting his work in Paris and London.  Collin had a dramatic effect on his work, insisting Green paint entirely in-situ, which undoubtedly led to the distinctive tonal and atmospheric qualities found in his work upon returning to the States.

His work is highly original, and while they often exhibit a gray light and muted tonality, he certainly was fluent in bringing intense color into his scenes when necessary; and despite a certain touch of impressionism can be found in his work, it is highly academic and his pastoral and figural paintings in particular show a distinct taste for realism.  He would finally settle in Chicago, where he specialized in figural paintings; late in life he focused almost entirely on watercolors.

Green belonged to the American Watercolor Society, was a charter member of the Lotus Club, and had membership in the Salmagundi Club (1887) where he lived out his last years. The Salmagundi Club would recognize him with the distinguished Samuel T. Shaw Prize in 1898, the first time the prize was ever given, and the Morgan Prize in 1903.  He also received honorable mention at the Paris Salon of 1900 and a bronze medal at the St. Louis Exhibition of 1904.  His work was shown at The Art Institute of Chicago, the Boston Art Club, the National Academy of Design, and the Paris Salon.

Condition Report:
In excellent condition, no observed flaws. Under UV perhaps a small touchup to upper left corner. Housed in a vintage giltwood frame with discoloration to gilding and small chips/losses throughout.