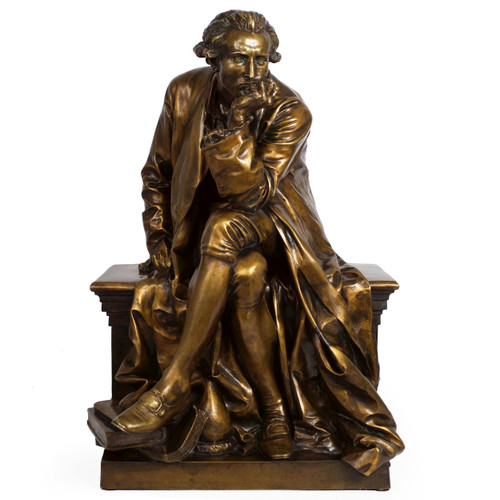 The present model is a reduction of Dalou's "Monument to Antoine Laurent Lavoisier" executed for the Grand Amphitheater of the New Sorbonne in Paris where he remains situated directly opposing the stage in a domed niche. He received the commission in 1886 for the roughly three meter high stone figure and exhibited a model for it at the Salon de la Société Nationale des Beaux-Arts of 1890 as no. 1256.

Dalou received permission in 1892 to offer reductions of the model and contracted with Susse Freres to cast his figures, revising it into four models with slight differences. The present model is an exact reduction of his commission while the others have variations to the base, the positioning of the books and the posture of the figure. One of these versions he exhibited at the Salon de la Société Nationale of 1901 as no. 32. One of his variations, known as reduction no. 1 of the same dimensions as the present model was offered at Christies (Sale 1365, 23 April 2004, lot 138) for an achieved sale price of $ 9560 USD.

The present model was cast by the house of Susse, probably just shortly after Dalou's death in 1902. It is a technically exceptional model cast in the lost-wax method with great attention to detail shown in every aspect of the finishing - notable is the crispness of the model where every detail was carefully brought out by the foundry. It is finished in a complex golden brown artistic patination.

ANTOINE LAURENT LAVOISIER
Born in 1743, Antoine Laurent Lavoisier was a central figure in the chemical revolution of the 18th century and would eventually become known as the father of modern chemistry. He developed theories around the chemical reactivity of oxygen and was a coauthor for the present system of naming chemical substances. As a young man of 26, he was elected to the French Academy of Sciences and was a leading public figure and administrator for the Monarch. He had a share of the "General Farm" under the Monarch, an enterprise that helped finance the government and shared in the taxes collected for the government; it was for this participation he was executed in 1794 during the French Revolution's Reign of Terror along with his father-in-law and 26 other General Farm members.

AIMÉ-JULES DALOU
Born in Paris on the last day of December 1838, Aimé-Jules Dalou was admitted to the Ecole des Beaux-Arts at the age of sixteen. There he trained under the Romantic influences of Jean-Baptiste Carpeaux and the rigid Academic teachings of Francois-Joseph Duret; neither of these suited Dalou and he became something of an antithesis to his teachers. Opposing the classicism of the Second Empire, Dalou firmly associated himself with the Third Republic. He became deeply involved in politics and after the events of March 18th through May 28th of 1871 surrounding the revolutionary government of Paris by the Commune. During this period he was named the head of preservation at the Louvre by the Commune of Paris, but after the recapture of Paris by the national government he was immediately forced to exile in England. He remained in London from 1871 through the amnesty of 1879, teaching and sculpting extensively.

Upon his return to France, Dalou is credited with helping restart exhibitions of the "Salon for Dissidents", originally founded in the 1860's and which exhibited at the Champs de Mars in 1890; it was sponsored by the Société Nationale des Beaux-Arts, of which he was a founding member. His achievements include a medal in 1870, a medal of honour in 1889 and the Grand Prix at the Exposition Universelle of 1889.