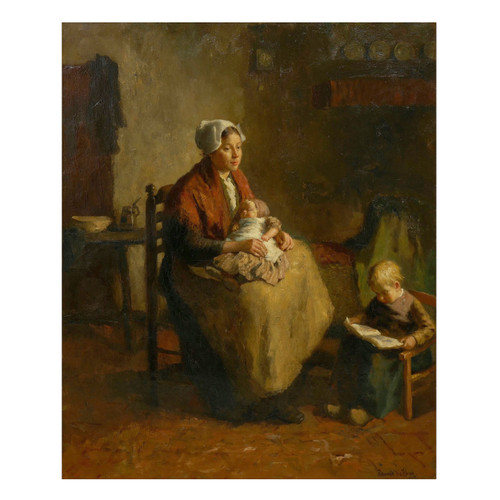 Likely painted in the 1920s, the present work by Bernard de Hoog is not dated but does include a faint stamp on the stretcher verso noting its original retailer: Robert C. Vose. A third-generation art dealer of what is now Vose Galleries, Robert C. Vose moved his shop to 559 Boylston Street, Boston, Massachusetts as addressed in the stamp in June of 1924. They were one of the premier art galleries of the time, holding one of the largest stocks of paintings in the United States outside of New York City. It is a large work for de Hoog, though not unusually large: at least 7 paintings are documented in the Benezit has having sold with the same dimensions, the last a depiction of Washing Day in Amsterdam on October 23 2002 for 25,000 euros. The work is housed in a period Barbizon frame of very fine quality with an oxidization that suggests the frame and canvas are at least very nearly contemporary to one another, though it is rather likely the first frame.

The work highlights a young and tired mother, surrounding her with light and truly making her face the focal point of the painting. Her shoulders are slightly hunched as her infant rests peacefully wrapped in layers and bundled in a small white blanket. Light shines from a source to the right, cascading across her toddler son and making his hair glow golden as he sits quietly reading in a miniature chair. The surroundings are simple and the layered garments suggest a late autumn or winter setting, but the scene feels warm and nostalgic. It is signed in his typical script lower right "Bernard de Hoog".

Born in Amsterdam, Holland in 1886, Bernard de Hoog wanted to pursue art studies after showing some talent at a young age, but this was against the wishes of his father and instead he went to work in a merchant's office. The merchant saw a sample of his studies and commissioned de Hoog to paint a portrait of his wife. Following this encouragement, de Hoog studied under a drawing master and later at the Quellinus School in Amsterdam with the assistance of a subsidy by the queen. There he was pupil to Johann Frederick Hulk Sr. and worked under the famous animal painter Jan van Essen. He was heavily influenced by the technical excellence and realism of the Hague School and deeply admired the old masters, copying works of Pieter de Hooch and Frans Hals.

It was from his first major show in 1886 that his work began to gain visibility with his Amsterdam exhibition of During the Sermon in New Church. He continued to exhibit throughout Holland, but also became well known internationally where his works were exported to ready markets in England, Canada and the United States. Rather insightful auction records during his lifetime show his works hitting the secondary market as early as 1907. His work of Humble Interior was offered in New York in 1911 when he was 45 years old where it achieved $ 1000 USD, an inflation adjusted figure coming to just over $ 25,000 in today's dollars.

Throughout his career, de Hoog remained disciplined and focused on his specialization. True to the principles of the Hague School, his emphasis was on tangible subjects, true surroundings, tender moments and technical superiority in the use of light to create atmosphere. His work tended towards family scenes, often interior paintings with a mother and her children at the center of his focus, usually depicting humble circumstances and peasant life unapologetically. Not one to romanticize poverty, the body of his work rather captures the dignity of hard work and the highlights the richness of a loving home and deep relationships. While his work certainly has an appreciation for the masters of the 18th and 19th centuries, there is a distinctly modern element in his work that is borderline Impressionist with a heavy impasto and vigorous brush work. His work is always characterized by translucency of light, warm atmosphere, an incredibly diverse palette and rich color development, complexity of character portrayal and the genuine nature of his subjects.