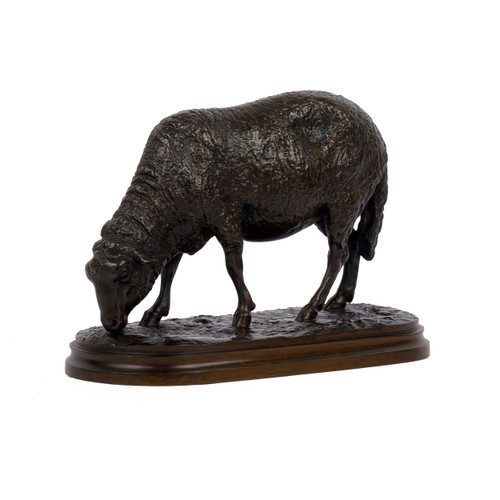 Though she only produced a limited variety of sculpture models in her lifetime, Rosa Bonheur’s sheep are some of the most cherished. Sensitive and exacting, the manner in which she could capture their chaotic wool while also rendering very fine details in the skin of the eyes and striations in the fur of the legs and face is noteworthy. This model in particular is an exquisite representation of her abilities, the detailing clearly captured from the mold and not simply chased and filed into the surface by the foundry. It is fitting that it was her first sculpture to exhibit at the Paris Salon of 1842. The present model was finished in a rich dark brown patina with a reddish and golden hue to the base edges. The underside shows typical joinery for Peyrol casts with peened post ends.

Rosa was particularly good at capturing charming characteristics of her animals without even a hint of the Romanticism found in works by academic animal sculptures of the years prior whereby emotions and expressions were imposed on the creatures with little regard for reality. Her grazing ewe is a gentle creature, confident and safe as it grazes in the peaceful pasture briefly represented in the naturalistic base. Mouton Broutant is held in the permanent collection of the Museum of Bordeaux in France, the Fine Arts Museums of San Francisco as well as the National Gallery of Art in Washington D.C. It is also held in the permanent collection of the Metropolitan Museum of Fine Arts (acc. no. 1986.256).