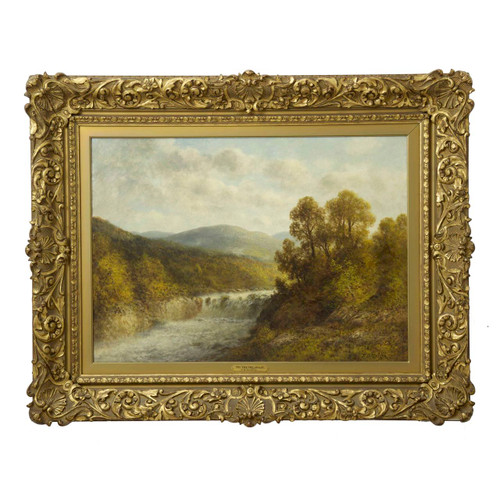 THOMAS B. GRIFFIN (AMERICAN, 1858-1918) “ON THE DELAWARE”Executed in oil on canvas, signed lower right; housed in an apparently original frame
Item # 801BYP27A


Born in Philadelphia, Pennsylvania in 1858, Thomas Bartholomew (or Bailey) Griffin studied formally at the National Academy of Design in New York.  He exhibited regularly and became well known for his impressionistic landscape work, a large body of which focused on the Castkills.  The present example is a stretch of the Delaware river that Griffin commonly painted, the rather distinctive hillscape in the distance a common feature scene along these river scenes - one such example is held in the collection of the Brooklyn Museum of Art titled “Moonlight on the Delaware River” with a slightly leftward view of the same hillscape.  His work is characterized by a fervent impasto a complex layering of color that results in these vivid and chaotic autumn colors.  The water pouring over the tiny waterfall produces light frothing on the water.  There is a motion and movement in the scene that only impressionistic layering can capture with any realism - Griffin does a brilliant portrayal of a nature that is alive and moving, vivid and full of warmth in this changing season.  A large and significant piece, it is a powerful strikepoint piece for even a large room; it is housed in what appears to be the original frame and remains in pristine original condition.