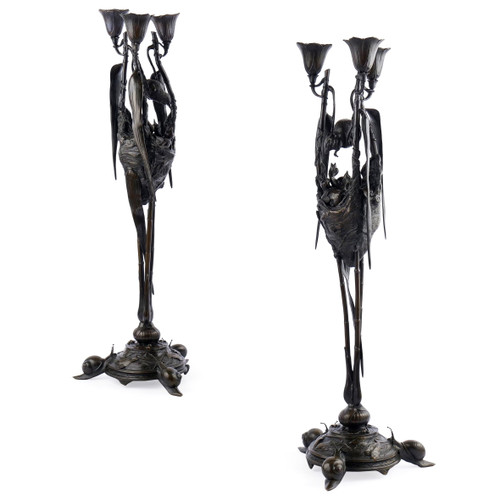 RARE PAIR OF THREE-LIGHT PATINATED BRONZE CANDELABRA BY AUGUSTE NICOLAS CAIN (FRENCH, 1822-1894)
Birds' nests, with chicks being fed a worm in one by the mother, visited by a curious field mouse in the other; each signed CAIN
Item # 001UGP28W

Noted in the Mene and Cain catalogue as "No. 78 Candélabre nid de fauvettes, Hauteur 0.50" (Cadet), this rare and extremely fine pair of candelabra are a beautiful picture of naturalism. They depict two visitors to a nest of newly hatched chicks: a mother offering a worm in mouth to the hungry mouths and in the second a curious field mouse, likely disappointed by the absence of fresh eggs.

Thin reeds raise the three candle wells like flowers blossoming, the nest hung between them from twists of vines wrapped around them with grasses, branches, feathers and vines intermingled to build out the nests within which three chicks reach with open beaks. A single leafy shoot drapes from each reed as well as another long leaf draped from the edge of the nest, the reeds raised over a rounded base with relief of vines, foliage and scattered berries footed on three snails. Each is signed CAIN in the base. They are finished in a fine black and brown patination.