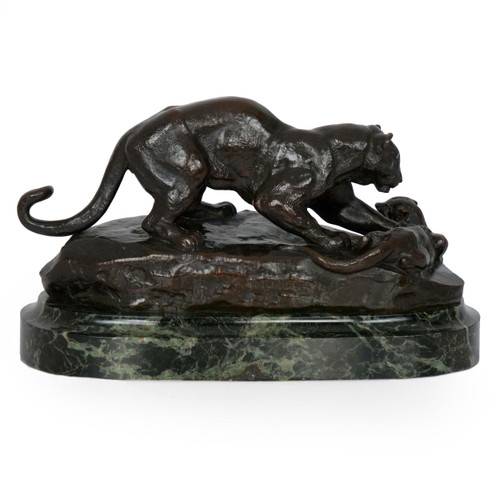 A rare and exquisite cast that has not been on the market since it was acquired by a private collector in 1935, this exquisite model of Panthère suprenant un zibeth (Panther attacking a civet cat) depicts the large beast pawing at the snarling cat with curiosity and confidence. Two versions of this were modeled by Antoine-Louis Barye, the present model  (the same version held by the Walters Gallery) and one with a more active base, the Panther slightly separated from the Civet by a valley in the rocks. The rich modeling of the surface shows a relatively early model with the tooling and texturing of the mold beautifully captured in casting. It is signed in block lettering along the front edge A.L. Barye and is situated over an early mottled green marble base.

A tasteful group devoid of excess, Barye focuses the viewer entirely on the interaction of two animals: the playful and inquisitive personality of the panther is on full display as the insecurities and ferocity of the civet is only hinted. There is a softness captured in the features of the panther that shows this to be neither a challenge or a strain but rather a pursuit of sport and curiosity.

Condition Report:
Excellent condition, original patina. Originality of green base unknown, though present with the model at the time of sale in 1935.