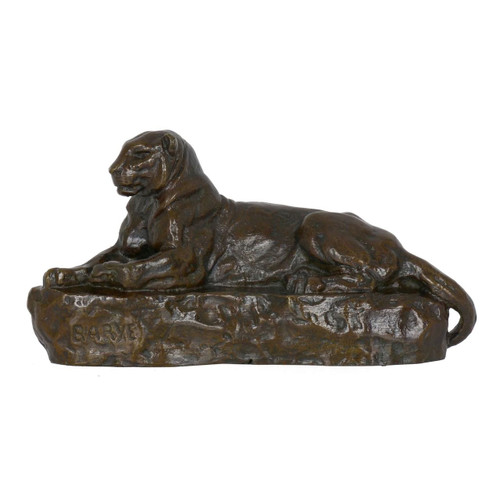 Cast by the firm of Ferdinand Barbedienne, this model is generally identified in the earliest catalogues as "Panther of India No. 1" and was originally listed in Barye’s catalogue of 1855, noted by Poletti as having exhibition in 1860.  This is a posthumous cast probably circa 1900, the back being sealed with Barbedienne’s foundry mark.

It is beautifully finished in a rich and complex brown and red-oxide chemical patination.  The modeling of the surface is quite excellent and would suggest use of a relatively well preserved mold for the casting.  Note the fine naturalistic rippling and texturing of the panther's complex coat.  It is an expert sand-cast example, overall being finely chased and chiseled.

Museums in possession of "Panthére de l'Inde no. 1":

Condition Report:
Some lightness to patina by signature, perhaps having been over-polished at some point.  Slight casting flaw along extreme edge of base.