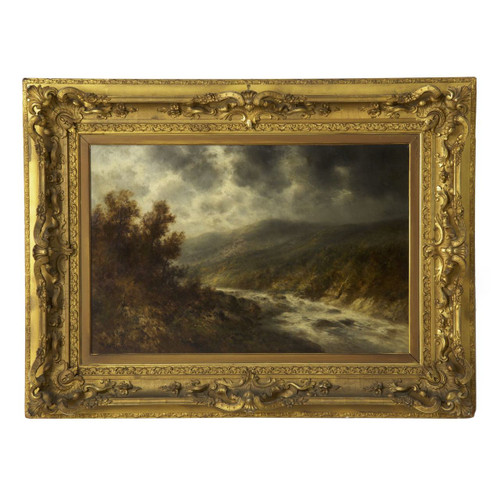 Born in Philadelphia, Pennsylvania in 1858, Thomas Bartholomew (or Bailey) Griffin studied formally at the National Academy of Design in New York.  He exhibited regularly and became well known for his impressionistic landscape work, a large body of which focused on the Castkills; his paintings "Hunter Mountain, Catskills" and "View from the Catskills (from Haine's Corners)" were both exhibited at the National Academy in 1896, the same year his address was listed at 340 Fulton Street in Brooklyn, New York. He would later move to Baltimore, MD.

The present example is a powerful piece that likely depicts the Delaware river flowing between the hills during autumn, the foliage almost fiery with oranges and yellows throughout the trees and underbrush that are dulled by the presence of an impending storm.  Clouds gathered overhead are slowly clearing as rain is still falling in the forefront of the scene under nearly black skies.  Water is rushing through the small valley formed in the hills and there is a certain momentum in the scene as light begins to break through the thinning clouds.

Griffin’s brushstrokes are minute and relentless with a gentle layering that lends hints of shapes and colors that build into a full landscape.  The work remains in excellent condition, having been professionally conserved in the last two decades and remaining vibrant and sturdy on a fresh lining.  It is signed in the lower left corner and is housed in what is likely the original frame, or at least one that is of the period with a nearly identical level of oxidization in the pine secondary woods.  This is a magnificent frame with intricate pierced profiles in the corners and centers with an embossed relief repeating-acanthus decoration around the inner and outer edges.

Condition Report:
Relined, likely housed in its original frame.  Cracks, repairs and losses to frame, mostly in the corners.  Painting has been conserved in the last decade or so and remains in pristine condition with a vibrant surface and clear varnish.