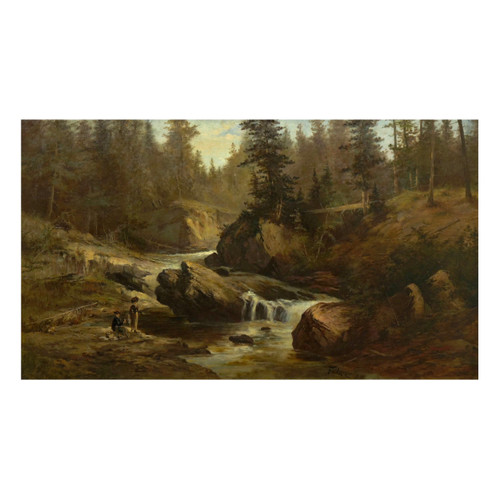 Little ascribes scale better to a landscape than the addition of figures, which in this fine scene leaves the viewer awed by the sheer scale of the surrounding trees and towering boulders.

In capturing the contemporary beside nature, the artist chooses to contextualize the work and place it firmly in the historical timeline, whereas a landscape devoid of modernity can be timeless.  Luerzer's choice to include figures in this scene is important and completely changes the drama and emotion of the image.

Here a middle aged man and woman have ventured into the total isolation of the forest to picnic on the banks of the Lester River. The natural colors of their clothing match the earthy tones of the warm near-sepia palette Luerzer used to capture the land. Both figures are dressed in their best, a cumbersome way to move through nature, but interestingly tells a story of an ethic: things worth doing are difficult. Both figures have prepared extensively with a blanket, picnic basket, a glass and a bottle of wine. A silkiness in the falling water captures the peacefulness of the river as it moves through the woods, neither figure focusing on the other, both with a distant gaze lost in the forest behind the viewer. This is a notable departure from the more common depiction of peasantry and farmers in the countryside.

The Lester River in Duluth, Minnesota is an area Luerzer painted at least several times, though without figures - it is interesting to compare these to the scale and presence of the present image to get a feel for the effect. A work that similarly uses figures to this effect in creating awe and a sense of natural majesty is his Figures in the Redwoods (1904), a painting commissioned by Robert Whitley of Duluth during Luerzer's one year trip through the western states. In it, a pair of figures sit on logs surrounded by towering redwood trees that Whitley acquired for lumber and instead chose to conserve.

Condition Report:
Old relining on linen. Contemporary frame with some wear. Clean and vibrant surface. Restoration visible under UV, including spot touch ups in the sky, a larger group of flaring on the right edge where a 1" tear was repaired, some varnish flaring upper left corner that is difficult to read. Small chips where frame rubs in extreme lower left corner and extreme upper left corner. One dimple with associated paint loss (below the dip in the sky) - we can have these restored upon request, contact for a quote and schedule.