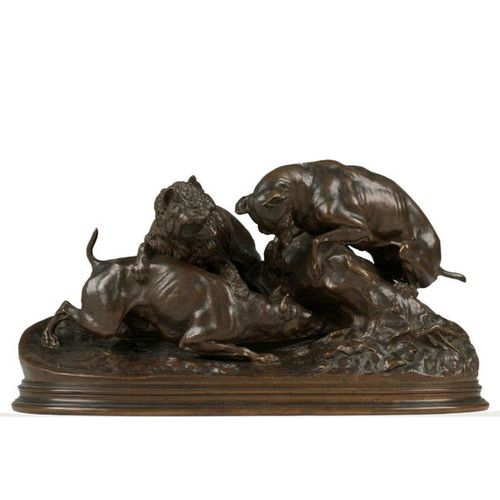 This is an absolute treasure and a rare find indeed - one of the few models of this work by Mene cast by the foundry of Ferdinand Barbedienne and stamped as such along the base. This model was likely cast shortly after his death, probably between the years of 1875-1890.  After his death in 1871, rights to his models were purchased by Susse Freres, the foundry that put forth a great number of his pieces in the last quarter of the 19th century.  Barbedienne models are somewhat more uncommon and generally are well cast, though earlier models always have better surface qualities, as is evident in this example.  It is signed on the naturalistic base with Mene's signature. The correct dimension for this casting is 38 cm (14 7/8" long), a size well documented in several reference books on the subject (Bronzes of the 19th Century, Kjellberg, pg 484), smaller dimensions being later recasts of the subject absent of the original molds.