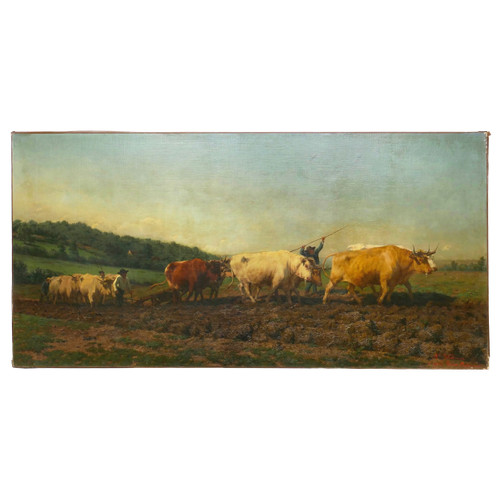 VIEW OTHER WORKS BY Bonheur, Rosa

One of Rosa Bonheur's most famous paintings, this work is a carefully executed reproduction that is nearly contemporary to her. It is painted by an unknown artist "B. William" and clearly attributed as being after her, signed lower right "B. William d'apris Rosa Bonheur". Even the dimensions are nearly identical to the original with a monumental width of 103".

A celebration of the purity and virtue of labor, the work is generally known as Labourages Nivernais (Ploughing in Nivernais) and is primarily an animal painting. The cowherd and farmer are almost an afterthought, these diminutive figures that follow in the footsteps of the heroes of the painting: the Charolais-Nivernais oxen. The work was commissioned by the French government in 1848 for the Musée de Lyon, but it drew such immediate critical acclaim that it remained in Paris at the Musée du Luxembourg before eventually being given to the Louvre and later to the Musée d'Orsay. Rosa Bonheur's companion Anna Klumpke believed there to have been a second version of this painting, but in fact there are at least two other versions of this painting: one of the same dimensions that sold Christies, London in March of 1929 and another small version dated 1849 that is only 8 1/2" x 16 1/8" (See Shriver).

The present work is a very fine and beautifully detailed rendition of her masterpiece, executed in oil on canvas with intricate brush stroke and vibrant lively color. An incredibly powerful work both in subject matter and sheer scale, it is a rare and most exciting find.

Condition Report:
Surface grime and yellowed varnish: would benefit eventually from being cleaned. Edge wrap absent in some areas. Some edge wear and rubbing. Not framed.