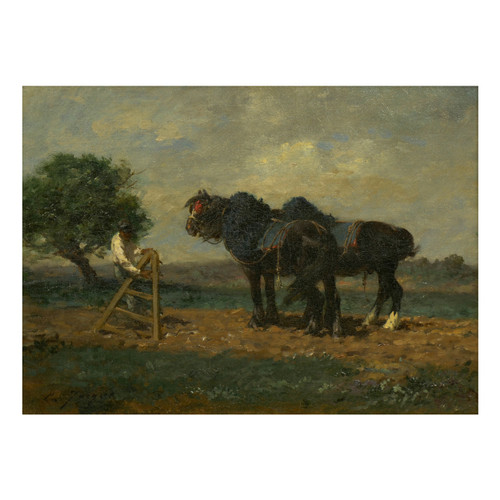 A glimpse into the struggles of the 19th century, this fine Barbizon scene by Émile Jacque discards with the romance and nostalgia of peasantry to capture a young farmer together with his plow stuck in the mud. His pair of work-horses stand idly by while he frees the plow.

Like his father, Charles Émile Jacque, Émile was deeply interested in both the Barbizon technique of painting and used animals in most of his scenes, but focused much more heavily on including figures and horses in his scenes. For that matter, when looking over a brief survey of his paintings that have sold at auction in the Benezit, all but a handful are Equestrian with a particular emphasis on their partnership with the farmer. He was the eldest son of Charles Jacque and studied under the famous Jean-Léon Gérôme (French, 1824-1904). He received an honourable mention at the Exposition Universelle in 1889 and a third-class medal in 1901.

Jacque's interest in detail and anatomical accuracy of his animals is evident even in this scene, where the horses are perhaps secondary in subject but primary in presence: note the intricate attention shown to their saddles, the rope work, the shadows playing over the musculature of their bodies and faces.

Far from a gloomy repudiation of struggle, the artist shows joy in the face of struggle.  He depicts the farmer as tidy and focused, bathed in sunlight under a bright cheery sky. It is a commitment to realism and accuracy, a celebration of work and a historical snapshot of a time where labor was difficult.