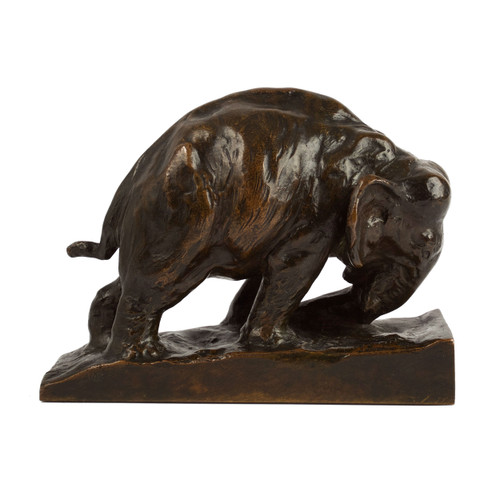 A model that Mahonri Young contracted to both the Griffoul foundry in Newark and the Gorham Co. foundry in New York, the Pushing Elephant bookends were one of his most sought-after works. The present sculpture was executed by Gorham Co. using the lost-wax method of casting is an exceptional example with exquisite texture captured directly from the mold, the surface silky and translucent with a rich medium-brown patina with complex hues of gold and reddish-oxide as well as ranges of black. The model is numbered 42 and is cold-stamped GORHAM CO. FOUNDERS 0469 along the edge of the base; the signature is captured directly from the mold into the naturalistic base and the underside of the model is filled with plaster beneath green baize.

Born to Salt Lake City, Utah on August 9th 1877 to Mahonri M. Young and Agnes Mackintosh Young, grandson to Mormon leader Brigham Young, Mahonri Mackintosh Young was self-taught from an early age, sculpting animals and birds in clay even as a young boy. After receiving some early recognition for his drawings, he began to pursue illustration and studied under James T. Harwood.

When Cyrus E. Dallin (1861-1944), the first and most prominent Mormon sculptor, visited Salt Lake City for his monumental commission of the Brigham Young Pioneer Monument (1892), Young's interest in sculpture was piqued and he decided he wanted to become a sculptor. By working as an illustrator for the Salt Lake Tribune, he was able to save enough money to put himself through school, first in New York at the Art Students League starting in 1899 and then in Paris at the Academié Julian from 1901-1905 where he studied under the Romantic sculptor Charles Raoul Verlet as well as the Académie Delécluse and Académie Colarossi. Much of his studies were directed towards painting and drawing, but after a visit to Italy he refocused his efforts on sculpture as a primary medium.

Inspired by Jean-François Millet's French peasants, his first paintings focused on the social conditions of the rural peasant, a subject matter he observed keenly and competently; his interest developed from there to express in both paint and sculpture scenes of modern men laboring in their work. These models are at least subtle hints of his admiration for Belgian sculptors Constantin Meunier (1831-1905) and George Minne, the overall theme capturing the dignity and humanity of struggle, labor and achievement; his subjects reflected carefully on the economic and social problems advanced by a new industrial age in America. A far cry from the tendency for idealization, he sought to capture the very essence of the worker devoid of nostalgia. These were some of his finest works and his sensitive eye for human form, harmony of movement and ability to convey tension and emotion would be a natural progression into his later studies of boxers.

Upon returning to the United States in 1905 due to financial problems, he lived briefly in Utah where he received a commission for the Seagull Monument (1912) dedicated to the rescue of Mormon crops from hordes of locusts by the birds. In 1910 he moved to New York City to further his career opportunities and would spend most of his working career there, but always would consider himself a "child of the west". The pinnacle of his career would be just shy of his seventieth birthday with the unveiling of This is the Place Monument for Emigration Canyon State Park; in its dedication he noted that despite the years, the day of its unveiling was the happiest of his life.

In 1948 he was elected to full membership of New York's National Academy of Design where he remained active for the last ten years of his life. He died in Norwalk, Connecticut on November 2, 1957.

Condition Report:
Fine original condition. Patina beautifully preserved under wax, some rubbing to edges of base, some relief highlights to body of the elephant (probably as intended); early green baize beneath sculpture worn and stained.