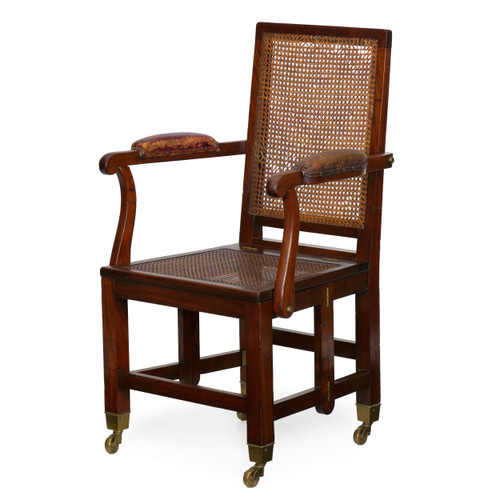 An extraordinary metamorphic armchair by the firm of Johnstone & Jeanes of London, this quality campaign seating piece would almost certainly have been accompanied by a carrying case to ensure its safe transit, as most of these break-down chairs were designed to be brought out when needed and safely stored thereafter. By depressing small tabs behind either arm support, the upper arm is allowed to rotate back on a brass bolt while the support rotates forward to hang at the knee. Hinges inside of the back edge of the seat allow it to be raised and hinges inside of each joint of the legs allow them to fold inward in a concertina-action. The whole rests over original brass castor feet.

Generally these chairs would have leather cushions made for them, allowing the caning to be comfortable and enjoyable. The use of caning was an important part of the evolution of campaign furniture, this light-weight and sturdy material making the mobility of the chair possible while lending great strength to the structure.

The front rail of the apron stamp is visible when you raise the seat.

Condition Report:
Old breaks to early caning. Scars on sides of the arms where they have rubbed against the hinges. Old restoration to the seat back verso with spliced inserts strengthening the frame and associated color matching. Right arm (facing) with a tiny loss to tenon of arm support, visible when you release the clasp to "break-down" the chair. Apparently original hardware. Original leather in heavily worn condition.