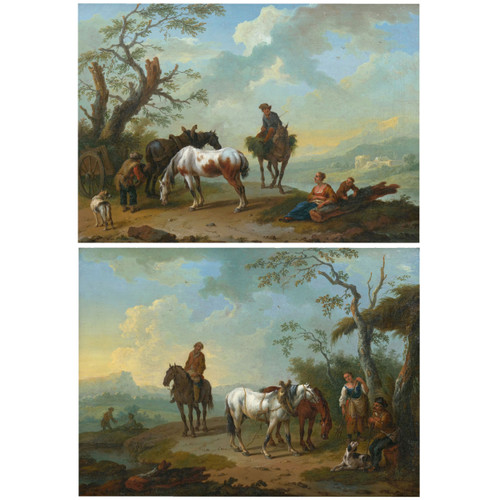 "Resting on the Bluff", a pair of paintings | Pieter van Bloemen (attr.)

A vibrant and complex pair of Italianate landscape scenes of travelers resting on a bluff overlooking the valley and cities beyond, they are a powerful presentation with exquisitely painted animals. Notable influences of anthropomorphic Romanticism in the features of the horses lend a certain humor and lightheartedness to the scenes; in one a cheery rider arrives on a donkey and engages a resting woman and her child, presumably while her husband reattaches the cart to the resting horses. In the other a rider chats with a man and his wife while they rest their horses.

Pieter van Bloemen was born in Antwerp on Jan 17 of 1657. He was also known also known as Standaart and his first name is sometimes spelled Peeter or Peter. Beginning around the age of 10, Pieter studied under Simon Johannes van Douw, a well-known painter of battle scenes. Some references also note him as being a pupil of landscape painter Willem Romeijn (Haarlem, 1624-94). By the age of 17 he was the Master of the Guild of St. Luke in Antwerp.

His work always centered around dramatic landscapes, often incorporating large collections of animals in scenes of war, robbery, market life and genre depictions of villagers. These often have an Italianate influence and much of his work included a white horse in the composition.

He traveled extensively, including spending time in Lyon in 1684 with Dutch artists Gillis Weenix and Adriaen van Der Cabel. In 1688 Pieter traveled to Rome with his brother Jan Frans and returned in 1690 with their younger brother Norbert. Both of his brothers were accomplished painters. The brothers made trips to Naples, Malta and Sicily and some works are a collaboration between Pieter and Jan Frans. Because of Pieter's skill in painting animals, horses in particular, he was often invited to collaborate on works with local artists. One notable example is the battle scene he painted for the Duke of Marlborough during his visit of Antwerp, a portrait depiction of the Battle of Ramillies of 1706 that he completed in collaboration with Balthasar van den Bossche.

The nickname "Standaart" comes from Pieter's association with a group of Dutch and Flemish artists in Rome called Schildersbent. It was practice of the association to give one another a "bent name" and this almost undoubtedly refers to the banners and standards so often depicted in his scenes of military conflict.