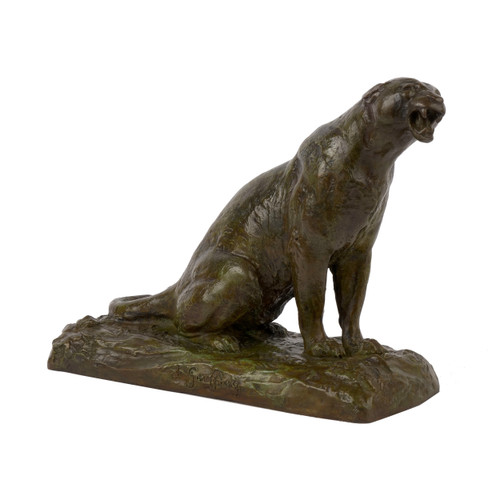 The vigorously modeled figure of Roaring Jaguar was executed in the modernist taste with a light impasto to the surface; it is an exquisite casting that perfectly captures Geoffroy careful working of the wax. He does a marvelous job alluding to the power, ferocity, agility and curious personality of the panther. The model is finished in a complex variegated green patina with remnants of plaster in the crevices of the model.

Adolphe Louis Victor Geoffroy was born in Paris, France on February 27th of 1844 son of Adolphe Victor Geoffroy de Chaume (1816-1892). He studied under his father and began exhibiting at the Salon in 1861 and continued through 1910. He was one of the original members of the Société des Artistes Français in 1883, was awarded a third class medal in 1875 and achieved the second class medal at the Salon of 1889. His bronze bas-reliefs on the doors of the Strasbourg Cathedral are a lasting reminder of his public contributions.