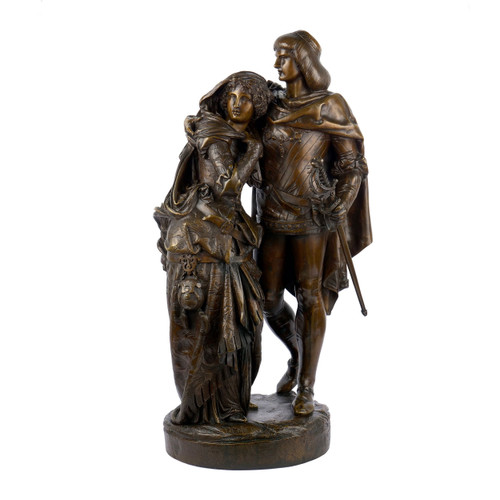 VIEW OTHER WORKS BY Deniére Foundry

FINE PATINATED BRONZE GROUP OF "ROMEO ET JULIET" BY DENIERE
Cast by the Denier foundry, signed in base "DENIERE", circa 1860
Item # 001WGZ28Q

An extraordinarily well detailed and complex casting of Romeo and Juliet signed in the base DENIERE. The casting quality is simply exceptional with every tiny detail captured from the mold and replicated beautifully in the bronze, but of further note is the quality of finishing work: the chiseling is exquisite and the warm brown surface patina is beautifully preserved and translucent under wax. Note the texturing and fine development of Romeo's hair, the perfect realism of his sand-cast sword (which lifts free from his hand) and the intricate development of Juliet's garment.

THE HOUSE OF DENIERE
Founded during the end of the 18th century by Jean-François Denière (French, 1774-1866) and his associate François-Thomas Matelin as Denière et Matelin at 58, rue de Turenne in Paris, Jean-François was a member of the Union des Fondeurs in Paris as early as 1818. They primarily produced bronze elements for a wide range of clocks, candelabras, furnishings and chandeliers, initially contracting for the most important companies of the day: Gallé, Ravrio and Thomire. Matelin left the firm in 1820 and Denière relocated the showroom to 15, rue Vivienne and the atelier at 9, rue d'Orléans in the Marais.

The House of Denière was responsible for some of the finest foundry work in 19th century, enjoying the patronage of Louis Philippe with numerous royal commissions, the foundry employing at one point four hundred artisans. His son Guillaume joined the firm and aided his father during the Exposition Universelle of 1844, after which his father retired during the same year. He also joined the Union des Fondeurs in 1847 and would act as president of the Union from 1848 through 1857. By this point the company had a firmly established reputation for excellence, which led Ferdinand Barbedienne to select Deniére to cast the works for him during the 1850s prior to establishing his own foundry.

Guillaume led the firm to exhibit at the Exposition de l'Union Centrale des Beaux-Arts Appliqués à l'Industrie in 1874 and continued to cast works for the wealthiest clientele through the end of the century.