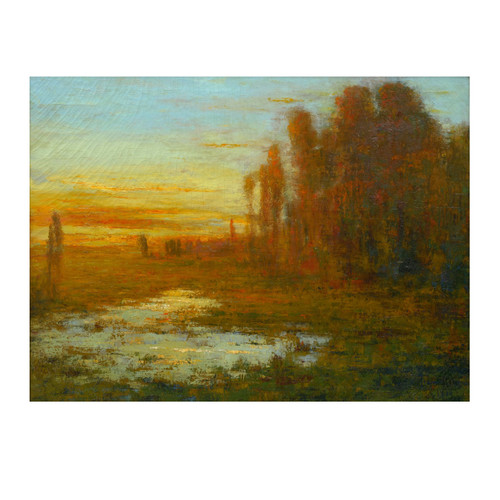 With glowing luminescence, Termöhlen captures the golden hour as the sun sets over the horizon before a grove of Italian cypress trees overlooking a marsh. His typical brush stroke is chaotic and vigorous with a palette knife build up to the textured surface over which the warm colors are mixed and blended on the canvas. The work is signed lower right "Karl Termohlen 1910" and is titled verso.

KARL EMIL TERMÖHLEN
Born in Copenhagen, Denmark in 1863 into a family of distinguished artists, Karl Emil Termöhlen spent the first part of his career in France and Italy. Here he painted twilight landscapes along the Mediterranean before moving to the United States at the end of the nineteenth century. He established himself in Chicago, Illinois where he gained acceptance as a recognized artist of tonal landscapes and had works accepted and displayed both in the Philadelphia Academy of Fine Art and the Art Institute in Chicago. One of his pictures took a prize in the National Academy of Design, NY.

Best known for his mysterious nocturnes, Termöhlen was a versatile artist who tried his hand at every subject, creating stills, portraits, and animal paintings in addition to landscapes and seascapes. The magic of his paintings was his feeling for color and light, which he transformed into blazing sunsets and shimmering moonlights. [reference: Brush & Pencil, Nov. 1903, vol. XIII No. 2; biography adapted from Quest Royal Fine Art]