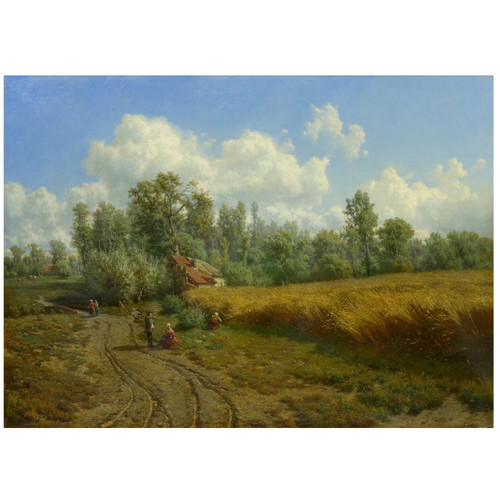 An incredibly powerful and exquisitely detailed work by Jean-Baptiste Kindermans, the landscape captures a moment of rural life in 19th century Belgium.

A well worn dirt path with competing grooves of carriage tracks meanders past a field of wheat where a peasant woman collects spare grains.  A young man is taking a break from his labors while chatting with a seated girl while in the distance a mother and daughter stroll past a disheveled cottage set in the forest.

Two cows in the distant pasture graze while another rests in the green grasses and the shade of the looming trees. Notable is the fine handling of the sky with skillfully rendered cloud cover that becomes hazy along the edges of the forest as the density of atmosphere is reproduced in pigment.

But perhaps most representative of Kindermans' skill is his handling of the foliage and wheat, these of such complete variety and intricate detailing with sun playing across the three-dimensions of the foliage and piercing the wheat with inordinate technical expertise.

Executed in oil on canvas, the work is signed in his typical black script lower left "J B Kindermans."

JEAN-BAPTISTE KINDERMANS
After studying at the Académie des Beaux-Arts at Ville de Namur from 1836 through 1840 under Ferdinand Marinus, Jean-Baptiste Kindermans would eventually move to Switzerland, where he spent much of his professional life. He traveled extensively throughout Europe, spending time in Germany, England and Italy. Starting in 1842, Kindermans began exhibiting in Brussels, but would also send works for exhibition in Ghent, Dublin, Liége, Louvain, The Hague, London, Antwerp and Paris. He was made a member of the Order of Leopold in 1863 and was an active Belgian member of the teaching body in 1866. He has works held in the permanent collections of the museums of Antwerp, Brussels and Rheims as well as the Hermitage.