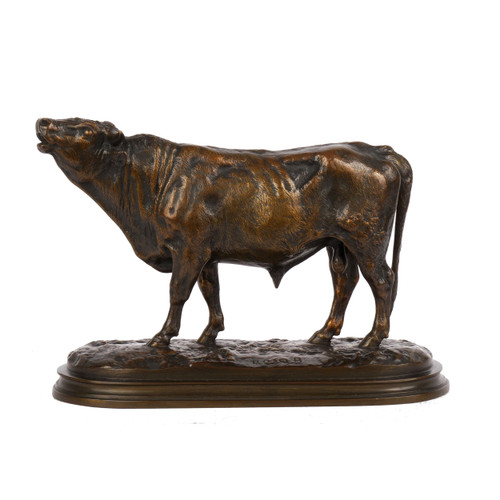 A finely cast lifetime bronze sculpture by Rosa Bonheur, this gorgeous little work of a bellowing bull is finished in a most attractive golden-brown patina, entirely original and remaining in excellent condition. The details captured from the mold in the present cast are exceptional and show a relatively early mold with exceptional finishing - all elements are beautifully chiseled, sanded and filed for a simply gorgeous result. While there is no foundry mark, the model is almost undoubtedly cast by Rosa's brother-in-law, Hippolyte Peyrol at the Peyrol foundry. We have handled this model numerous times, both with the tiny foundry mark and without and Rosa's work is very frequently cast sans foundry markings, but the technique of casting is relatively unique and consistent with Peyrol: most notably in the peened end posts through the underside of the base.

Isidore Bonheur exhibited in 1872 his model of a bellowing bull, which we may still have available in the gallery, a study that perfectly opposes Rosa's Taureau Beuglant. Both were cast regularly by Hippolyte Peyrol and are of nearly identical dimensions; Isidore's model was arguably cast to be a pair to Rosa's and they were likely retailed together.

Examples of Rosa's work cast during her lifetime are rare and always exquisite - we specialize in her work as well as that of her brother, Isidore Bonheur. This is a very fine acquisition for the serious collector of the Animaliers.

Condition Report:
Exquisite original patina with only the most minor of handling wear. Cleaned, waxed and polished.