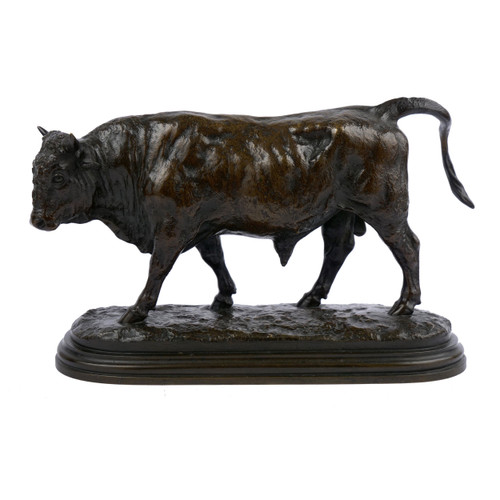 VIEW OTHER WORKS BY Bonheur, Rosa

BRONZE SCULPTURE OF “TAUREAU” BY ROSA BONHEUR
Signed in base “Rosa B”, cast by Peyrol but unmarked; modeled circa 1846
Item # 912EFC05A

A rare and fine sculpture that is extensively documented in the relatively small body of Rosa Bonheur’s work in bronze, the model captures a Striding Bull over a naturalistic base.  A treacherous and powerful animal, he is portrayed as a lean and dominating figure, a certain majestic quality captured in his confident march.  An anatomically exacting model, the bull is proportionally and structurally precise with a level of surface detail that is quite moving.  His thin and sleek coat is taught as it moves over muscles, tendons and large bone structure. He is situated over a naturalistic rocky base signed in a crisp flowing hand “Rosa B”.

The quality of the patina is self-evident with a translucent glowing surface rich with browns and blacks. It is unmarked but, in light of the highly distinctive construction technique, was almost certainly cast by her brother-in-law, Hippolyte Peyrol.

Remaining in exceptional original condition, it is an exquisite museum quality acquisition.