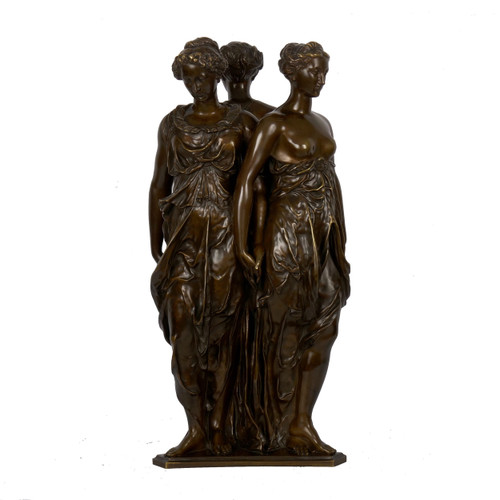 A fine 19th century model of Germain Pilon's "Three Graces", this intricate and incredibly fine casting was completed by the foundry of Victor Paillard with his cachet of a crown over V.P. cold-stamped along the edge of the base.

It was originally executed as a monument bearing the heart of King Henri II in the 16th-century and was commissioned in 1561 by Catherine de Medici. The original was executed by Pilon from a single block of marble, this held in the collection of the Louvre since 1816. The urn raised over the trio held the heart of the king and was destroyed during the French Revolution; it has since been replaced.

The present casting is above reproach in every way, the only flaw being the conversion to a lamp and later back to its original form as a sculpture with the removal of the brass rod central. Note the exquisite chiseling, the perfectly smooth surfaces and complex chemical patina throughout - the figures have intricate hair with strands and twists textured with utmost precision; their eyelids, fingernails, toes and chaotic garments are cast with photographic realism.

The "Three Graces" depict Thalia, Euphrosyne and Aglaia, the minor deities that are perhaps derived from the ancient model of the triple Hecate: the Greek goddess of the crossroads in the three feminine bodies. The "Three Charities" were attributed as daughters of Zeus and Eurynome, though other sources also note them as being the daughters of Dionysus.

Condition Report:
Minor handling wear to patina. Minor scuffs to the arms. Scuffs around the drilled hole between the three graces where the lamp electrification rod would previously have protruded.