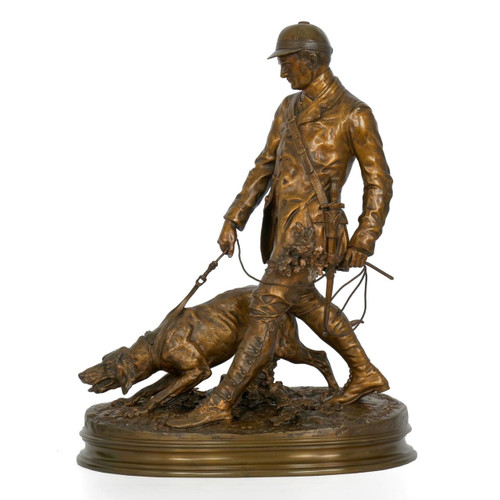 Featured in Pierre Jules Mene's posthumous catalog Collection compléte des Bronzes d'Art de P.-J. Méne et de Aug. Cain, Sujets de Chasse - Animaux, a text put forward by Susse Freres in the last years of the 19th century to market his sculpture, it was note as number 7, Valet de Limier, and was offered in the original dimension of 47 cm for 400 francs.  Méne's modeling of both the figure and the hound is typical of his work, choosing to present both objectively without a hint of the Romantic notions of his predecessors.  Unlike many of his Animalier peers, Méne showed an even hand at both figural and animal subjects, this evident in the present example - his "Valet" is exceptionally well cast.  The chiseling is exquisite, leaving even the more minute detail in the figure's vest, buttons, cross-body sword harness and ribbon around his cap fully represented.  Notable is the exquisite and unusual rich golden copper patination, this a wash over the darker brown and black patina, creating a striking contrast between recesses and relief.  This was the last piece he exhibited, the wax model presented at the Paris Salons in 1879, the year of his death.  It is a rare and clearly a rather early cast of the model, a fine work for serious collectors of Mené's sculpture.