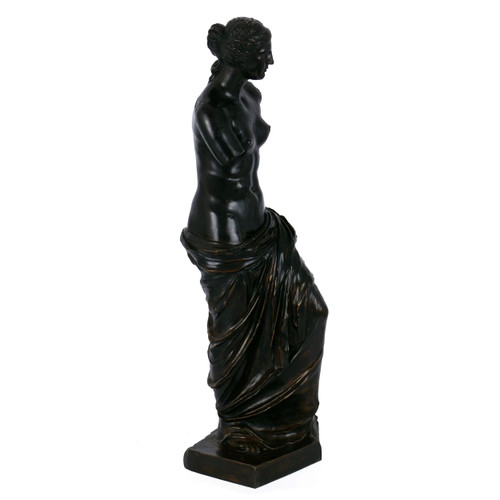 A very fine Grand Tour casting of the famous "Venus de Milo" or "Aphrodite de Milo" after the antique original held in the permanent collection of the Louvre.  It was cast during the third-quarter of the 19th century and the edge of the base is signed in script Ed. Delesalle, noting that the piece was edited by the firm Delesalle et Cie of Paris.

The first mention of Delesalle is in the 1862 Annuaire General du Commerce where they are noted as operating at 41, boulevard du Temple and 14, rue Beranger as a fabricator of bronzes. However, it is not entirely known whether they were truly fabricators of bronze sculpture or instead acted as editeurs, curating and marketing works cast by other foundries. In all probability, like many of their contemporaries, they performed both roles. The company went bankrupt in 1874, at which point all of their models were sold at auction. For further information on Delesalle, see "The Founders and Editors of the Barye Bronzes" by J.G. Reinis, where the firm is discussed briefly with some examples of their various signatures.

The present model is an exquisitely cast piece, complete with well detailed "losses" of the marble surface in close replication of the ancient example and very good handling of the surfaces - all have been beautifully cast, finely chiseled, filed and finished expertly and patinated in a black patina with bronze burnished highlights.

Condition Report:
Original patina, worn on the base with lighter bronze hues showing through; relieved highlights to patina on upraised elements of garment and body; surface carefully cleaned and waxed, polished and in fine presentation-ready condition.