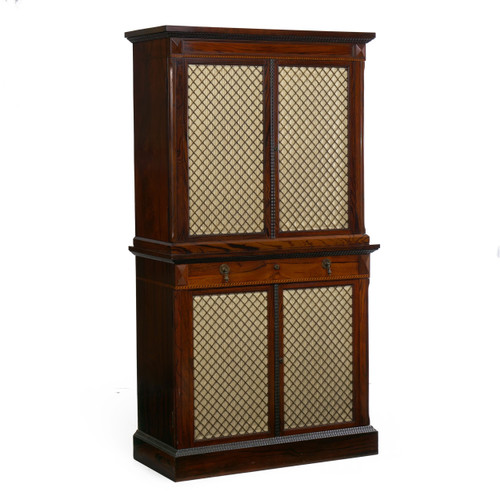 An exceptional rosewood standing humidor cabinet in two parts, it is of the highest quality and beautifully preserved in its original state. Of a very heavy and solid construction, the veneered facade is highlighted with rippled ebonized moldings. These also line the joint between the doors, each with a fine brass latticework over pleated silk backed by mahogany panels.

The upper doors open to reveal a fitted interior with fifteen smaller central drawers flanked by four larger drawers on either side, each drawer approximately 10 3/4" in depth to comfortably allow for cigar storage.

In the apron, a single vertical drawer withdraws from the lower case. The lower doors hide away more practical storage space with three large drawers with mahogany facades. All drawers are exquisitely dovetailed. The doors and apron drawer retain original locks stamped "Late J. Bramah 124 Piccadilly" under crowns and "J.T. Needs 100 New Bond St". The cabinet is raised on a simple plinth base.

A rare and exciting object with chaotic veneers and exquisite craftsmanship.

The firm of C. Mellier & Co. was founded by Charles Mellier after working for the Anglo-French firm of Georges-Alphonse Monbro from his arrival in London through 1868 when he purchased the firm from Monbro. Despite an award-winning reputation as Monbro, Charles Mellier renamed the firm C. Mellier & Co. and would go on to become one of the most distinguished cabinet-making firms in London.

Mellier was renowned for his work with the most well-regarded interior designers and leading architects of his day, producing collections of furnishings and decorations for such residences as the Farmleigh House and Estate in Dublin, the Manderston, Berwickshire property of Sir James Miller, and the Grosvenor Square residence of Henry Duveen in London. One of his most famous commissions was for the trans-Atlantic ocean liner, Mauritania, built in 1907. Operating at 60 Margaret Street and Cavendish Square, Charles Mellier purchased the prestigious 26A Albemarle Street, which he used as both his showroom and residence.

By the end of the 19th century, Mellier & Co was recognized as one of the finest cabinet-making firms in England. He was perhaps the most well-regarded manufacturer to exhibit in the World Fair exposition of 1904 in St. Louis, where they won multiple medals.