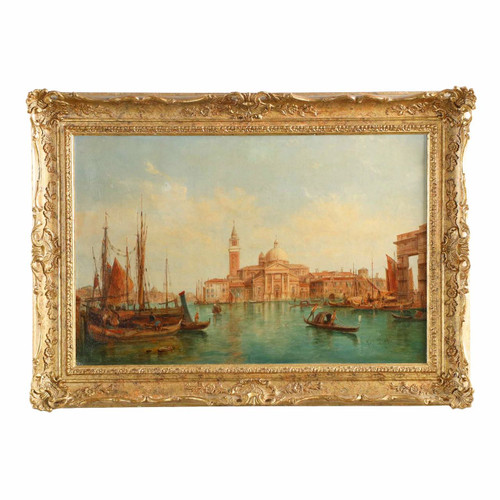 VIEW OTHER WORKS BY Pollentine, Alfred

A crisp and detailed view of the island and Church of San Giorgio Maggiore from the Canale San Marco with the tip of Punta della Dogana visible on the far right, the vibrant scene captures a moment of life along the canal during the last quarter of the 19th century.  Just slightly out of view on the far left is the Piazza San Marco.  Pollentine’s style is so distinctive and immediately recognizable, his nostalgic renderings of Venice always executed with crisp detail and a warmed palette, certainly architectural in emphasis while carefully seeking to capture the life and livelihood of the Venetians.  The present example was relined at some point in the last decade and the reverse has inscribed what was likely originally inscribed on the canvas beneath: “A. Pollentine, San Giorgio, Maggiore, Venice”.  It is an excellent example for collectors of Pollentine’s work.

Condition Report:
Relined with very light surface craquelure.  Would benefit from a surface cleaning.  Light scratch to varnish and tiny abrasion w/ associated touchup above masts on left of sky.  Under UV mostly free of inpainting other than touch ups around edges.