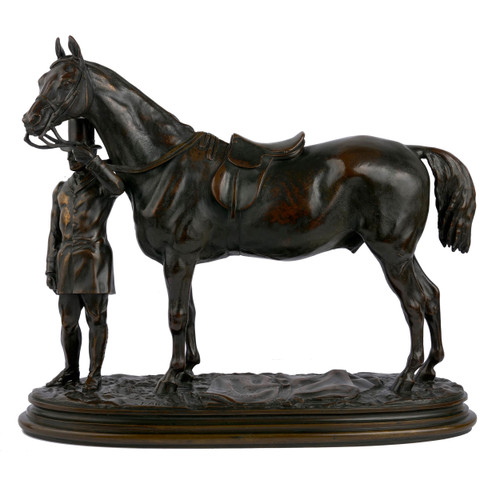 Originally modeled for exhibition at the 1864 Paris Salon as no. 2501, this exquisite and rare sculpture by Alfred Barye depicts the racehorse Walter Scott with his handler. In an exceptional and complex black patina with hints of a thin red-burgundy showing through in relief while a richer gold shows through in the handling wear to the figure and his tophat, the sculpture is a rich technical achievement.

The foundry skill evident in this model shows Barye's intimate understanding of the casting process, a knowledge learned working side-by-side with his brothers and father, the renowned Antoine-Louis Barye. They cast and finished a large portion of Antoine-Louis's oeuvre personally and his familiarity with the process is a hallmark of his output: always crisp, expertly chiseled and flawlessly patinated.

Tossed loosely on the ground is a leather saddlebag inscribed "Walter Scott, Cheval de Selle de l'Emperuer", beside which is the signature "BARYE Fils".

Alfred Barye worked mostly in the shadow of his father's achievements, both in life and posthumously being criticized for the quality of his work when compared to the genius of his father. Some of this was accentuated by the confusion Alfred created by signing his models simply "BARYE", perhaps innocent or intentional, but an attribution that created much confusion in the market and caused a riff between father and son. Eventually he would sign his work "A. Barye", "A. Barye Fils" or "Barye Fils" to eliminate confusion.

Where he lacked his father's creativity for unique composition, he brought an attention to detail and technical precision coupled with a deep understanding of anatomy for exacting models that have stood the test of time.  His skill as an Animalier is perhaps most evidenced in his sensitive racehorse works. Almost certainly modeled as commissions for the English market, his models of Walter Scott (1864), Gladiator (1865) and Vermout (1864) are incredibly pleasing works. Walter Scott is a particularly rare find on the open market.

Condition Report:
Appears to have loss to ends of stirrup leathers on either side. Wear to original patina on coat and tophat of standing figure, light handling wear to raised relief throughout.