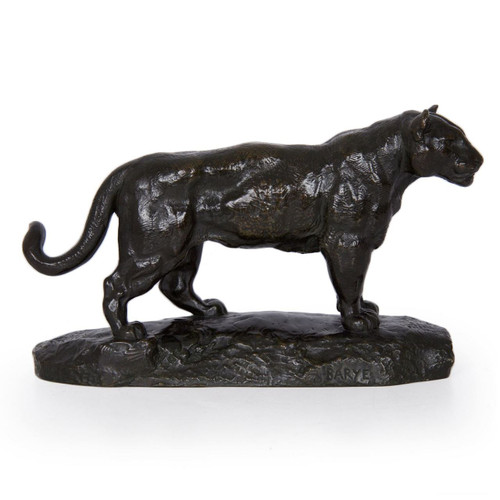 VIEW OTHER WORKS BY Barye, Antoine-Louis

This fine post-humous cast of Barye’s Jaguar Debout, No. 1 is circa the 1880s and was executed by the Barbedienne foundry, the edge of the base being crisply incised F. Barbedienne Fondeur and signed in his distinctive block type BARYE.  A relatively early model with exquisite detailing in the cast, the surface texturing is not simply chased and filed by the foundry after the fact but is clearly in the mold itself.  Later editions become lower in detail as the molds acquired by Barbedienne after Barye’s death in 1875 began to wear out.  This example is currently held in the collection of the Louvre (OA 5797) and the Corcoran Gallery of Art in Washington (73.63).  The original plaster model (15 x 25 cms) was in the Barye estate sale of 1875, no. 616.  It was included in the Louvre exhibition as Jaguar Debout (Retrospective cat. no. 33).  A bronze of similar dimensions is listed in Barye’s 1847-48 catalogue.  The finish of the present example is quite superb and the patina retains a fine silky glow under waxes.

Condition Report:
An old scrape along edge of naturalistic base, having since oxidized.  Light scuff to top of jaguar’s head.  Minor handling wear.  Remaining in exquisite overall condition.